McCarthy lays in to referee for red card in SuperSport draw

'It was a very physical game which I think went a little over-physical because the referee couldn’t control it,' said the AmaZulu head coach. 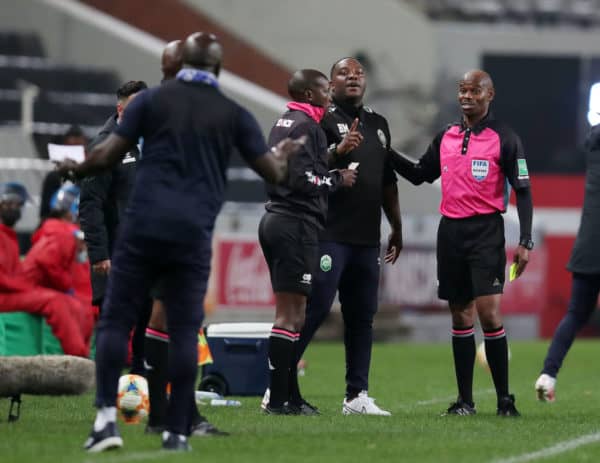 Benni McCarthy was unhappy with the refereeing on Tuesday. Picture: Muzi Ntombela/BackpagePix.

AmaZulu FC coach Benni McCarthy was vocal about what he felt was horrendous refereeing from Thando Ndzandzeka in Tuesday evening’s goalless draw against SuperSport United.

Usuthu finished the game with 10 players after Tercious Malepe was sent off with just over 15 minutes to the end of the game. McCarthy felt the red card was harsh and uncalled for.

“It was a very physical game which I think went a little over-physical because the referee couldn’t control it. It was one-way traffic and everything was going in favour of one team and not the other team,” said the free-talking McCarthy after the game.

During the match, McCarthy was involved in verbal sparring with a member of the SuperSport United technical team as tempers flared over the refereeing decisions.

“The frustrations grew a little in the game, the tackles went flying in and I thought it was a clean challenge from Tercious, winning the ball and not even touching the opposition,” added McCarthy

“But yeah, that’s the mentality our players have these days and they wonder why they underachieve, why they are mediocre. It’s because that’s the behaviour. You want to get opposition players sent off by diving and rolling over like your leg is broken when they don’t even touch you.

“The referee fell for it and the fourth official saw it and (while he) had been speaking to the referee when we committed a foul and telling the referee where to go. But he said nothing about this one and we were down to 10 men.”

The young mentor was, however, happy with how his team responded after being reduced to 10-men and not allowing their visitors to use the advantage.