An early own goal is enough to send Hugo Broos' side back to the top of Group G. 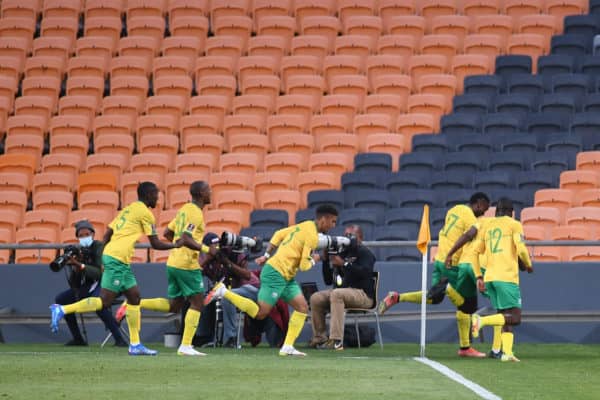 Bafana Bafana rewarded their returning fans with a Fifa World Cup qualifying victory on Tuesday evening, taking down Ethiopia 1-0 at FNB Stadium to return to the top of Group G.

ALSO READ: Bafana fans return to FNB Stadium, but not those without tickets

The 2000 supporters who were allowed in, as per the government’s Covid-19 regulations, were not exactly treated to the most inspiring display from Hugo Broos’ side. In fact, Ethiopia gave South Africa serious cause for concern, but in the end a third clean sheet in four Group G matches was secured, and the three points were gained via an own goal from Ethiopia captain Getaneh Kebede.

The result means Bafana go into their last two qualifiers next month a point ahead of Ghana, with those two sides in an increasingly tense duel for the top spot in the group – Ghana won 1-0 in Zimbabwe on Tuesday.

South Africa will next face Zimbabwe at home, while Ghana go to Ethiopia, before the two meet in Ghana in the final Group G qualifier. Only the group winner makes it into the final round of qualifying for Qatar 2022.

Hugo Broos made several changes to the side that had won 3-1 in Ethiopia on Saturday, Ethan Brooks dropping to the bench, while Yusuf Maart and Njabulo Ngcobo partnered in defensive midfield, Teboho Mokoena pushing higher up the field than in Bahir Dar.

Victor Letsoalo, who had come on early for Tshegofatso Mabasa, also started, as did Evidence Makgopa, following his late goal in Ethiopia.

And Bafana had the perfect start, as they went in front in just the 11th minute. Yusuf Maart’s delivery from the left was excellent, Letsoalo headed across goal and Kebede could only slice the ball into his own net.

Ethiopia, however, grew into the game, their own passing game benefitting from a superior playing surface to Bahir Dar.

Bafana were overrun in midfield at times, and Kebede had a great chance to make amends for his own goal in the 20th minute, but the former Bidvest Wits attacker shot too close to Ronwen Williams.

Bafana then wasted a great chance to double their lead as Bongokuhle Hlongwane got away down the right and sent in a brilliant cross that found Letsoalo, but the Royal AM striker blazed over the bar.

Ethiopia number eight Surafel Dagnachew had an excellent game in Ethiopia, and he was the next to test Williams, his effort from just outside the box tipped away by the Bafana goalkeeper.

Dagnachew had another chance from a free kick five minutes after the break, but his rocket deflected away off the head of Terrence Mashego, who luckily recovered quickly.

Bafana almost went further in front in the 55th minute as Makgopa latched onto Mokoena’s fine pass and lifted his finish past Fasil Gebremichael, but Hamid Suteman just got back to clear off the line.

Broos made some changes as the game progressed, Golden Arrows’ Thabani Zuke and TS Galaxy midfielder Ethan Brooks coming in to shore up the midfield.

Bafana should have had a penalty in the 76th minute, as Hlongwane was hacked down in the box, but Burundi referee Georges Gatogato inexplicably gave a goal kick instead.

Ethiopia, to their credit, kept pushing forward in search of a leveller, and substitute Abel Yalew volleyed an effort wide.  In the final minute, a free kick drifted inches wide, and Bafana were home and dry.