Tau was diagnosed on his return from Bafana duty. 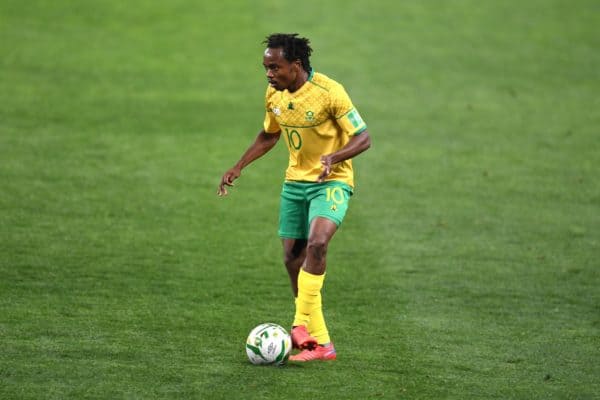 Percy Tau will be out of action for some time after he was diagnosed with an adductor muscle following his return from international duty for Bafana Bafana. (Photo by Lefty Shivambu/Gallo Images)

Bafana Bafana vice-captain and Al Ahly attacker, Percy Tau is set to miss a few weeks of action after he was diagnosed with an adductor muscle at the weekend.

ALSO READ: Lorch out for rest of the year in injury blow to Pirates

Tau was diagnosed on his return from Bafana duty where he helped the side to a historic and important 1-0 win over Ghana in the 2022 Fifa World Cup qualifiers.

A Phakaaathi source based in Egypt has revealed that Tau could miss three weeks of action but it could be more.

“I wish there were better words to say this… Tau is injured and will be out for almost two months,” said the source. “I have just heard that he has been found to have an adductor injury and that three weeks to heal. And rehabilitation after that could take another two weeks,” added the source.

He said Al Al hly were still to conduct further tests to ascertain the length of Tau’s injury so that a proper healing procedure can be followed.

“It is sad because everyone here was looking forward to seeing Percy on the field. He has been getting rave reviews and was the reason people wanted to watch the Bafana game.”

Meanwhile, as reported ealrier, Cavin Johnson has quit his job as assistant coach at Al Ahly and is back in South Africa, but as yet, Orlando Pirates have not expressed an interest in hiring him as their new head coach.

The former SuperSport United, Platinum Stars and AmaZulu head coach was part of the technical team that masterminded back-to-back Caf Champions League victories, but his time in Cairo is now over, a source told Phakaaathi last Thursday.