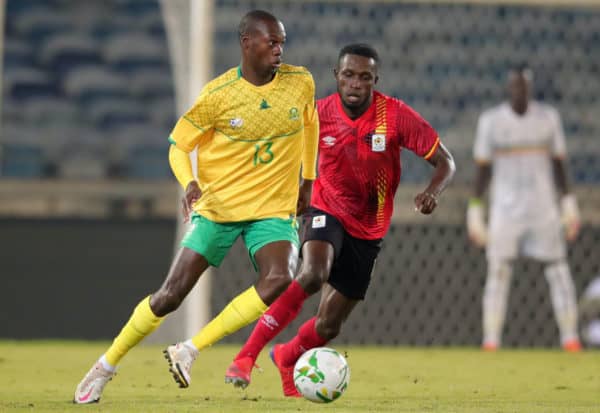 Evidence Makgopa, who scored twice for Bafana on Thursday, is reportedly wanted by Cheifs, Pirates and Sundowns. Picture: Samuel Shivambu/BackpagePix.

Makgopa, who scored a brace on his debut for Bafana Bafana in their 3-2 win over Uganda at the Orlando Stadium on Thursday – is said to have attracted interest from Kaizer Chiefs, Mamelodi Sundowns, SuperSport United and Orlando Pirates following his brilliant season with Bakgaga.

But Mphahlele says he doesn’t know anything about Makgopa being on the wanted list of Kaizer Chiefs or any team.

And says he is very proud to see the striker flourish for Bafana and that’s what he wants for all the young players at the club.

“Don’t ask me about other teams what they want and what they don’t want. I don’t know anything (about teams lining up to sign Makgopa)”, Mphahlele told Phakaaathi.

“We are very much proud of our boy, how we can we not be proud? It shows that we are producing and we adding value to the league and the nation. He was 17-years when he joined and we developed him. All my boys can go places, they just need time to develop fully. We give them confidence that they are the best. All of these boys have something to offer for this country and our supporters. Also, our supporters need to know that they are supporting a quality team.”

Mphahlele added that Makgopa’s display this past season can only mean he will be a much better player next season and he loves him so much because he is grounded. Makgopa’s efforts this season were rewarded with the DStv Most Promising Player Award last weekend.

“He is the young player of the season this year, he will be matured next season because he is 21-years old now. I wish him all the best and I treat him like my blood son because I have been with him for very a long time. He has been doing a lot of good work inside the field and he is also behaving very well outside the field, that’s what I like about him.”

The Baroka chairman further stated that he wishes a great future for the striker’s football career without giving anything away on whether they will be putting a price tag on him, with Kaizer Chiefs, Orlando Pirates and Mamelodi Sundowns said to be on alert.