Stellenbosch FC have now opened a four points gap at the top of the National First Division (NFD) standings after beating Jomo Cosmos 3-2 at Idas Valley on Saturday afternoon. 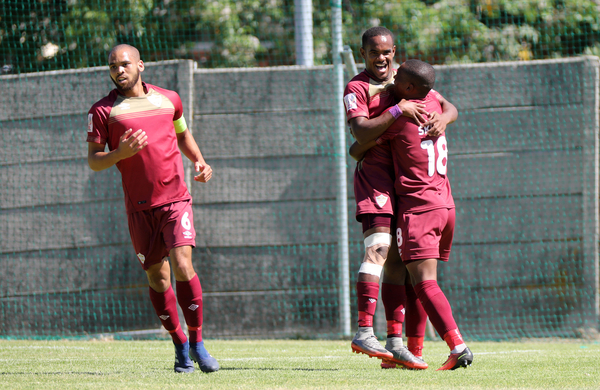 Steve Barker’s side were however made to sweat for their win by a stubborn Ezenkosi side who gave as much as they took until the final whistle.

On form striker Iqraam Rayners gave the home side the lead, but Charlton Mashumba cancelled it out, netting his third in three games for Jomo Sono’s side. Leletu Mabula put the home side ahead again but Tebogo Mabula was on hand to get the equaliser for Ezenkosi. It was Deano Van Rooyen who secured the full points for the home side when Ezenkosi had no reply for his striker later on.

Tshakhuma Tsha Madzivhandila were meanwhile the first victims of Ubuntu Cape Town who registered their first win of the season with Mhlengi Sigwebela’s goal proving enough to seal the win for Vladislav Heric’s side.

“We can see hard work pays off. We still behind, we still have a huge huge job to get ourselves safe which I believe we can,” said Heric after the match.

TS Galaxy 1 (S. Makgoka) AmaTuks 1 (M. Niang)
University of Pretoria coach Evagelos vellios admitted that he was happy to come out with a point after a 1-1 draw against a hard running TS Galaxy side. Mame Niang opened the scoring for AmaTuks but Stanley Makgoka saved the Rockets the blushes although coach Dan Malesela was left fuming, saying they can’t continue donating points like they have been doing.

Ubuntu Cape Town 1 (M. Sigwebela) 0 Tshakhuma 0
It was a day to remember for Ubuntu as they manmaged their first win of the season and it came against one of the early favourites for the NFD title. Mhlengi Sigwebela was the hero for the day as his penalty was enough to seal the win.

Real Kings 1 Cape Umoya 0
An unfortunate own goal by an Umoya player was enough for the Magic Boys to collect the full points and move away from the relegation zone.

Witbank Spurs 2 (M. Lukhele; K. Zwane) Ajax Cape Town 1 (M. Phohlongo)
Muhsin Ertugral handed in his resignation after this defeat, preferring that the side get someone else to do the job of getting them back to the top flight. The Urban Warriors started the season well, but then started to slow down a little and the latest defeat was the last straw for the well-travelled Ertugral. It was Ajax who scored first with Masilake Phohlongo, but Siyavutha came back when Mavuso Lukhele equalised before Khethukuthula Zwane sealed the win.

Maccabi 2 (N. Tladi; C. Mbesuma) Uthongathi 0
Mokete Tsotetsi has told Phakaaathi on Friday that he was happy that he had various sources for goals at his team and that trend continued as Nathniel Tladi and Collins Mbesuma were the go-to men for this match. Maccabi are now seventh on the standings with 14 points.

TS Sporting 2 (T. Sikhakhane; D. Chauke) Richards Bay 2 (K. Maphathe; P. Sekese)
Abantu Bemthetho may have thought they were on their way to arresting yet another three points as they led 2-0 at some points but the Natal Rich Boys were not done yet.
Thobela Sikhakhane opened the scoring before Decide Chauke added the second as it looked they would cruise to an easy win. But Katleho Maphathe and Paseka Sekese did the business for Richards Bay and earned their side a point away.